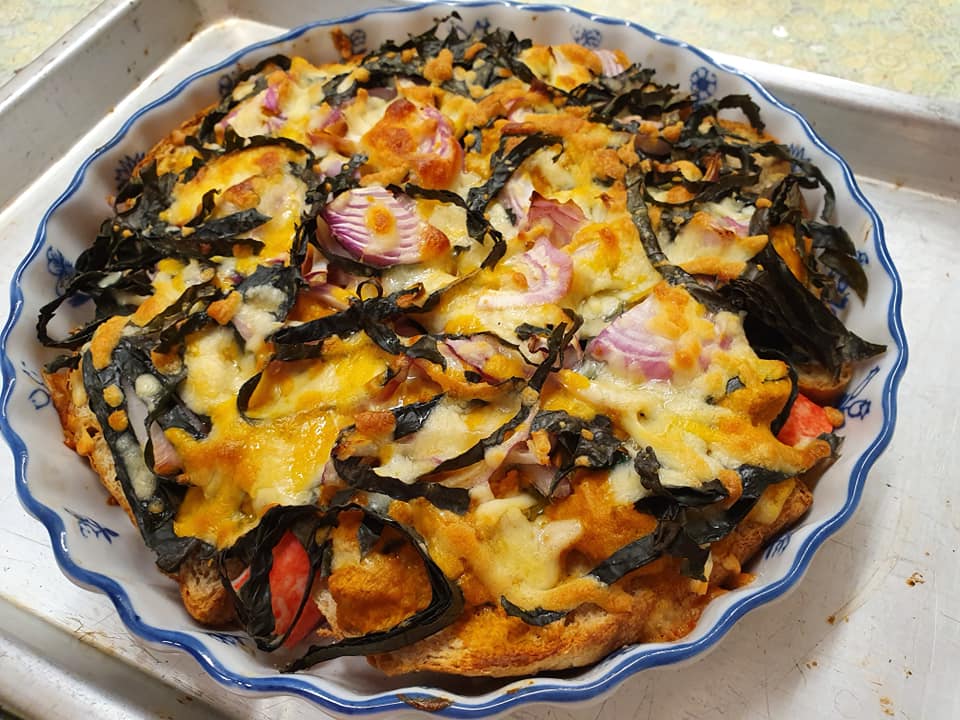 Specially created an Exotic Flan using the famous Fish Otak Otak from Malaysia. (literally it means Brain, but actually it is an exotic taste of Creamed Fish Paste with spices and coconut cream steamed to form a slab of set pudding-cake).

I have 2 Onions which I cut to shreds, 1 slab of Fish Otak-Otak (cut to about 8 short piece), 20 leaves (shredded) of Daun Kaduk which I planted in my courtyard. These green leaves have a special fragrance and taste and it is said to dispel away “wind” from your tummy,

I also have 3 slices Bread each cut to twos, 2 beaten eggs, 5 imitation Crab Sticks (each cut to 3 piece ) and a handful of Cheddar Cheese

Next, grease the base of a Flan Dish with some Coconut Oil or Butter.

First Layer: Line the dish with shredded Onion and Bread, beat the eggs with 1/2 tsp Salt and pour on top of Bread. Than lay the cut Imitation Crab Sticks in between the gaps of Bread.

2nd Layer: Top with 1 layer of shredded Daun Kaduk Green Leaves and spread a layer of cut Fish Otak-Otak over and top up with another layer of green Daun Kaduk (by the way DAUN means leaves in Malaysian or Indonesian).

Top Layer: Complete the flan with a layer of Cheddar Cheese.

Push into the preheated oven to bake for 15 mins.

When done, cut to 6 wedges and serve. Out of the world YUMMY!

Other Recipes by CATherina Hosoi

About CATherina Hosoi
About catherinahosoi.com

This site uses Akismet to reduce spam. Learn how your comment data is processed.